Located in the northeast of Baden-Wuerttemberg and covering an area of 4,765 square kilometres, the Heilbronn-Franken region is the largest region in Baden-Wuerttemberg. It is part of the European metropolitan region of Stuttgart and has the highest density of world market leaders among all regions across Germany measured against their number of inhabitants. With regard to the dynamic of its innovation process, Heilbronn-Franken has experienced an outstanding development and holds a considerable lead compared to the other regions of Baden-Wuerttemberg.

Covering an area of 4,765 square kilometres, the Heilbronn-Franken region is the largest region in Baden-Wuerttemberg and counts about 887,400 inhabitants. It is located north of Stuttgart between Neckar and Main and represents an economically strong part of the European metropolitan region Stuttgart. Compared to Baden-Wuerttemberg as a whole, the region's economy shows an above-average proportion of manufacturing industries. Consequently, the share of the entire services sector, including corporate services, is lower than the federal state's average.

The region's industry is the result of a historical development and covers a broad spectrum. Measured against the number of its inhabitants, the region of Heilbronn-Franken offers the highest density of world market leaders in Germany. Given the high share of employees working in cluster companies, Heilbronn-Franken is also considered an exemplary cluster-region.

The most important sectors (by the number of jobs liable for social insurance contributions excluding commerce, the construction and the public sector):

Compared to the other regions, the innovation strength of Heilbronn-Franken occupies a middle ranking position. Although the region's innovative performance is below average according to the level index, Heilbronn-Franken represents the strongest region with respect to an active innovation development - clearly ahead of all other regions. Important locations for research and development are Abstatt, Untergruppenbach and Hardthausen-Lampoldshausen. 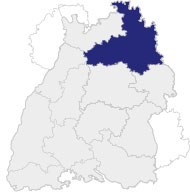